This is a short "chapter" I wrote a long time ago, included with nearly 20 others about how radio has been part of my life for so long. I move it to this blog so it can be shared on this July 4th, 2021, now 45 years later!  Some spacing and "appearance" didn't translate in the cut and paste, but I'm not going to try to correct it here.

1976 was an exciting year in the united states. It had been anticipated in our country with everything from peanut butter jars, to dog leashes, to the packaging of your favorite cereal decorated in red, white, and blue. Sometimes, that decoration was not in the best of taste (pun intended.). This drove my mother crazy. You have to understand, she was a former teacher, and very serious about history. She had written history for the State of Michigan, been consultant and researcher for many projects involving history and was not enthusiastic over the commercialization of our nation's 200th birthday. She despised the fact that everyone saw dollar signs in it, and the actual history of it was being overlooked in favor of the almighty dollar. Looking back on the July 4th, 1976 holiday, now, however... I can see how one weekend, one small event can change a life. And, it may have.

Being the patriotic American family we were, July 4th weekend meant vacation! This one would be different, however in one way, which none of our family of 4 knew when we left for our camping holiday. Well, especially for me, I should say.

We had a small tent-camper, not the “pop-up” style but something a little different, (we, after all were a little different) called the “Nimrod Safari.” it afforded sleeping for four people, an aisle down the middle of the tent, and gear storage under the upper (almost) double bed. That camper took us everywhere. We went to the Bay of Fundy 1400 miles up into Canada, we went through the Upper Peninsula of Michigan, Pennsylvania, and so many other places in my youth, and it had it's war-wounds including a hole in the canvas roof (seen as the dark spot in the picture below) burned from a hot light bulb... and on July 4th, 1976, the camper and the family together was parked at a campground in Sarnia, Ontario. Yes, we left the country for the country's 200th birthday. Mom was pleased, Im sure. 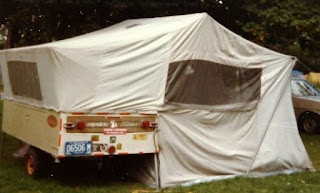 This was in my young radio geek years, so I was traveling with a couple of small, power-less radios, a crystal radio and a “pen” radio, the kind that make sound from just the signal in the air, and I grounded them to the corner stake of the tent. In Sarnia, it worked very well on at least a couple different stations' frequencies. 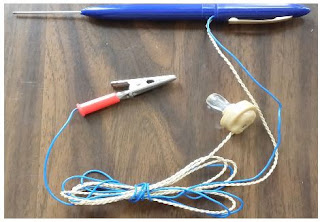 At some point in our stay, my father had gone to the local tourist literature stand, and found that CKJD had brochures, and offered tours. However, as the story is told to me, when he called, they claimed they no longer did tours. I'm told that Reg (my Father)  pushed politely, explained his boy was really into “radio” and, they gave in. I had no idea this was where we were going until we were in the car. We went to the studios, and their program director, Chuck Ingram greeted us and showed us the CKJD. He gave me a piece of the news wire of the day, and pointed out the announcer in the booth, showed us a wall of electronics and mechanical equipment, which I really didn't understand then, but now know it was their automation system. I was so excited about that visit...and never forgot it.

I kept that newswire piece a very long time in a bottom drawer, now long-gone. The automation system they had was huge, and took up a whole wall in one room, and was filled with tape carts and open reels, but very impressive for the day. I'm not sure that my parents knew I'd ever get into radio as an announcer, let alone an owner, but something told them that they should get me inside a station on a tour. Sometimes parents must just know when something is right to do, and I'm sure they did. To this day, I'll never forget that experience, and it's a story I love to tell. If you're reading this and you're a parent, please don't hesitate to get your kids exposed to many different things in which they show interest as a youngster.

Whether that first visit into the world of radio (broadcasting) would be considered a blessing, or a life-sentence depends on how you view the world I guess...and for me, it could depend on what day you ask...but the biggest part of me will always be grateful.

I finally found one of the radios like the "pen" in the picture and bought it. Friend Glen Rairigh of Americana Auctions is correct...eventually we buy back our favorite childhood things!  Also, to the best of my knowledge, CKJD disappeared qutie a few years ago after a call letter change, when Canada moved toward more FM and less AM.  But it exists here and in my memory of the July 4th weekend of 1976!